Quicken Loans launched an open source initiative just a few months ago which has been steadily picking up steam. I get bragging rights since I’m the first one in the IT Team to launch multiple open source projects! 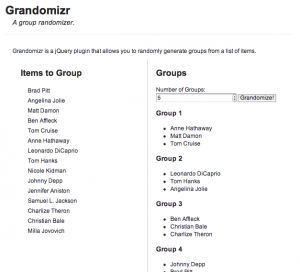 Grandomizr is a jQuery plugin that allows you to randomly generate a number of groups from a list of items. The idea came about while I was working with a new team of people and in order to maximize creativity we wanted to make sure everyone was regularly working with different groups.

This tool allows me to set up a list of everyone on the team, select the number of groups to form, and randomly sort the team into those groups. Check out the demo featuring a list of celebrities.

If you have any ideas or feedback, I’d love to see your comments – either on this post or on github.