It’s that time again – another Cuisine Week in the can! This month’s cuisine was Indian – which I haven’t had too often in the past – but what I have had was really good. In practice, this week had it’s highs and lows. A few of the dishes were absolutely awesome. One of them was pretty much a complete failure. And a few of them were waaay too spicy for my liking – even though I only used a fraction of the peppers that the recipes called for. 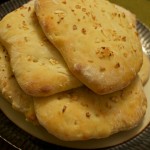 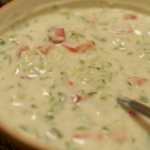 This pepper chicken was the best. I think it might make the Top 3 of all cuisine week dinners to date. I was concerned initially while making it due to the abundance of pepper that was called for – a full tablespoon of crushed peppercorns! But it turned out excellent and the other spices – ginger, garlic, turmeric, cayenne, and garam masala – complemented and polished the pepper flavor quite well. I definitely plan on making this one again – the only change will be using boneless chicken thighs rather than drumsticks. I really can’t wait to try it again!

With the chicken, I served up some homemade naan with cucumber and yogurt raita. The naan was pretty simple to make. It came out much thicker and fluffier than I expected, possibly just because I didn’t roll it out super thin. The raita was pretty good – it had a bit of kick to it too, from a serrano pepper. 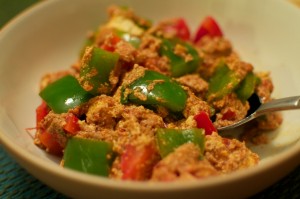 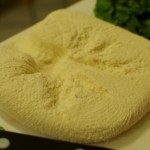 This was the big failure of the week, actually, of all the cuisine weeks so far. Really, it was alright – but there were a few problems… First of all, the paneer didn’t come out quite as I hoped. The recipe suggested that after adding lemon juice to boiling milk, the milk would curdle and form a cottage cheese like consistency. I waited and waited and waited for a cottage cheese consistency and it never happened. So finally, I gave up and moved forward with the next steps. I ended up with a block of cheese, but the consistency was sort of gritty, and as soon as I stirred it into the bell pepper stir fry – it fell apart and became more of a sauce.

On top of the cheese failure, it was hella spicy. The recipe called for 2 slit open green chili peppers and 6 crushed dried red chili peppers. The cookbook seemed to think that serranos would make for a good green chili, so that is what I used. I could barely eat a cup of this stir fry. It was just too hot for me. I offered the leftovers to a co-worker who loves peppers and has been known to munch on ghost peppers for fun, and even he said it was super spicy. Do Indians really eat food this spicy on a daily basis?!? 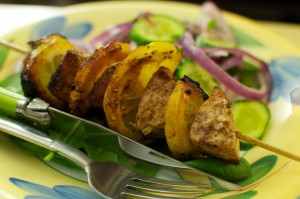 These fish kebabs were alright – nice and simple. It was my first time cooking with mahi mahi. Pairing it with lemons and garam masala was pretty tasty. The onion and cucumber relish was a nice and refreshing side. The onion was pickled which toned down the pungency and complemented the cucumber nicely. 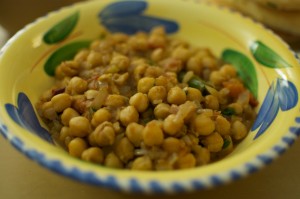 Another super spicy dish – and this time I only used 1 of 4 green chili peppers (serrano) along with the 8 dried red chili peppers called for. It was not quite as hot as the bell pepper paneer dish, but it did have a serious kick. Aside from the extreme hotness, it was very good – the chickpeas and spices were excellent. I’ll probably make it again and just tone down the peppers. 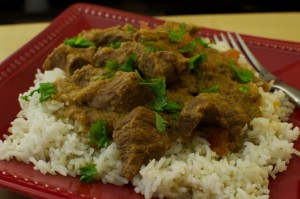 Last dinner of the week, second best. Again, I cut down on the chili peppers called for – only 1 diced serrano instead of 4 – and it had just about the right amount of heat. Still a good bite, but not enough to make my nose run! The lamb was wonderfully tender and flavorful.

So, lesson learned: Indians like insanely spicy food. I can’t even imagine how spicy some of those dishes would’ve been had I added ALL the peppers called for. Another takeaway, Indian food uses A LOT of spices – whole tablespoons of cumin and coriander, cayenne and turmeric, cardamom, cinnamon, ginger and garam masala. A very flavorful cuisine to say the least, if you can taste past the chili peppers!

That’s it! Next month I’ll be cooking Jamaican – a cuisine I have very minimal experience with. I’m still looking for a cookbook to get my recipes from, so if anyone has any suggestions – leave them in the comments!