Of course, with March being the month of St. Patrick’s Day, I felt it only proper to dedicate this month’s Cuisine Week to the Irish. There is a rumor in my family that one of our ancestors was Irish – I haven’t found that ancestor yet – but perhaps they, whoever they are, ate a few of these very dishes in their day.

This Cuisine Week was a bit less structured than previous weeks as Adam and I have been busy looking for a new house, but it worked out in the end and I was able to get five meals in over the course of eight days. So, here they are! 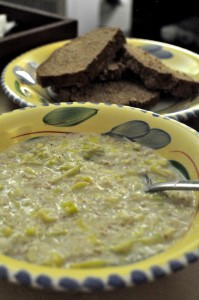 This soup, also known as “the king’s soup,” is said to have been the favorite dish of Ireland’s 16th century St. Columkille. It was very hearty with the oatmeal and a little sweet with the leeks (this was my first cooking experience with leeks) and very easy to make. I liked it quite a bit and will likely make it again as something to warm up with on a cold winter day.

The brown bread was alright. I probably could have been a bit more strict with my measurements though, since it ended up pretty dense. It was flavored with blackstrap molasses (another first in my cooking experience) which was nice and rich.

Dinner No. 2: Broiled Salmon with Butter and Honey 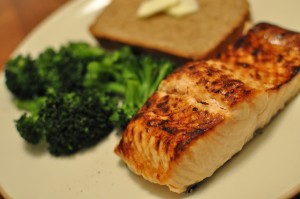 Salmon broiled in butter and honey is apparently a very ancient method of cooking salmon. It was pretty basic, all said and done, but a pretty solid and light way to enjoy a good piece of salmon. I paired it with some buttered broccoli and a slice of that Ballymaloe brown bread from the day before.

Dinner No. 3: Shepherd’s Pie and Peas with Mint 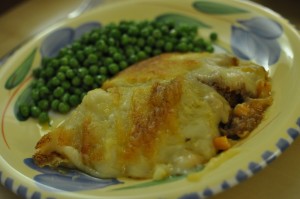 This recipe was called “The Best Shepard’s Pie,” and I’d say it met that label pretty well. It was pretty simple to put together and used all the standard ingredients. When I took it out of the oven, I could tell immediately that it was going to be awesome – the buttered potato topping had a beautiful golden color and the juices from the lamb, onions and carrots had started to creep up around the edges of the baking dish. Yum.

Dinner No. 4: Corned Beef with Parsley Sauce, Cabbage, and Colcannon 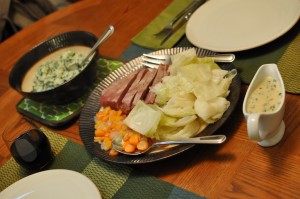 The most epic undertaking and results of the week, to say the least. I spent probably around three hours putting this one together, but for St. Patrick’s Day you’re supposed to go all out, right?! The corned beef was pre-corned, so I had it easy there. The colcannon (mashed potatoes with greens) was a nice change from the standard plain old mash. And the parsley sauce… oh the parsley sauce… was sooooo good, possibly my favorite part. Adam agreed, this feast was a 5/5. 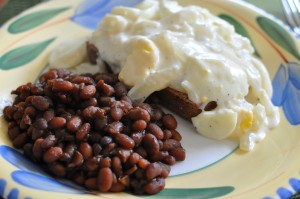 While I was cooking the St. Paddy’s day feast of the day before, I was also cooking these baked beans (second use of molasses ever). Yes, I made homemade baked beans. They came out pretty well, a bit dry, but that might just be how they eat them in Ireland. Since I had to reheat them in the morning, I put them back in a pot with a bit of water and maple syrup to help rehydrate them. They were pretty tasty, but I’ll probably stick to the canned version in the future.

The Convent Eggs were something Adam and I had never had anything like. The recipe was noted as coming from the time of the famine, so only very simple and basic ingredients were used. This recipe called for butter, onions, flour, milk, salt and pepper, and hard boiled eggs. You cook the onions, then add the flour and milk and stir until you have a sauce. At that point, you toss the sliced eggs in and serve on toast (I used that Ballymaloe brown bread from Dinner No. 1). It was good, but nothing ground breaking. I might try it again someday with some bonus seasonings.

So that was Irish Week! Easier than French week, not much healthier, but good eats and lots of learning overall.

Next month, I’ll be cooking Indian cuisine! I have a feeling the next few months won’t have such a dire effect on mine and Adam’s waistline :) See you next time!