Well, February’s Cuisine Week was scheduled for last week, but due to sickness I decided to push it back a week. That was a great decision because as it turns out, every main course out of Mastering the Art of French Cooking takes about three hours to make, so I needed to be at full strength!

All in all, French Week was very rich and yummy. I think I also learned a lot of great cooking techniques. Julia Child’s recipes are certainly not the easiest to follow, but they are very proper and thorough. 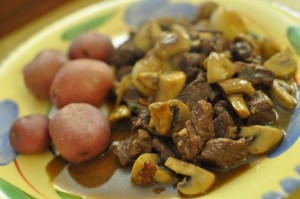 A classic to say the least. It was a fair amount of work – first taking care of the meat, then braising the onions, sautéing the mushrooms, and boiling the potatoes. There was a lot going on at once. But in the end, it came out pretty well. I wouldn’t say it was the most amazing beef stew I’ve ever had, but it was definitely tasty – I especially liked the onions and mushrooms. 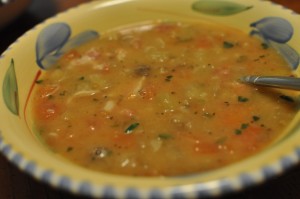 Another dish with multiple components to take care of, this soup was excellent. Step one was quick soaking the beans, then simmering them with bacon and spices. While that simmered for over an hour, it was time to work on the eggplant and tomatoes. The eggplant had to be salted and drained, then simmered with the tomatoes for a while. Lastly, the beans were pureed, and all the components came together with some more broth to simmer for a while more. The result was so flavorful and filling – Adam didn’t even notice the eggplant! 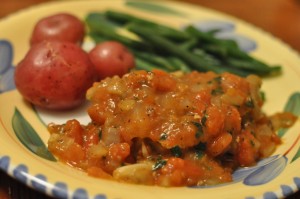 I’ve never worked with raw tuna before, so that was a cool experience in itself. The sauce complemented the tuna perfectly and it was fairly easy to put together. I don’t have too much more to say about this one, except that it was pretty good. 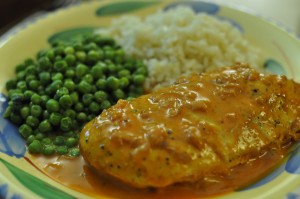 This one turned out to be the best of the week! The paprika-onion cream sauce was rich and delicious. I’ve never used paprika as a primary flavor before, but I’ll definitely consider it more often in the future. Paired with peas and risotto, this was an amazing dinner! 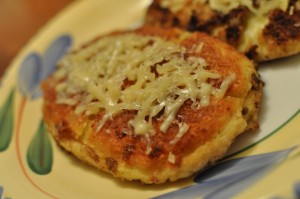 These potato cakes turned out nice and tasty, but they were probably the least successful item off this weeks menu. When I made the mashed potatoes, they came out too thin – so it was difficult to form patties with them. Then I forgot to add the cheese in the cakes, so I added it on top after flipping them over. Minus the cheese, they were stuffed with mushrooms, scallions and ham. Pretty tasty all said and done.

And that was it for French Week! All very good, but ultimately very exhausting. Next month…errr.. this month – it’s Irish!! Just in time for St. Patty’s Day!