It’s 2012!! Wow, did 2011 go by fast!? A big part of what made it such a good and fast year for me was my journey into the world of real cooking. Prior to April, we didn’t stray too far from the norm – Foreman burgers, frozen bagged dinners, pizza, quesodillas – things that were generally pretty quick and easy, but also pretty boring and repetitive.

After spending a week in Israel eating nothing but the best, I came back feeling inspired and motivated to eat better and work towards being healthier overall. So, I stopped shopping for food at Meijer and started shopping at the local Westborne Market. I picked up a few cooking magazines (the books would come a little later). And I was off to the races. It started out pretty simple – basic chicken and veggie recipes, steak and potatoes, etc. – but it didn’t take long before I was trying new things and getting creative.

Now, eight months later, I have a growing collection of over 20 cookbooks and magazines. And in the last few months, I’ve been getting more and more into international cuisine – as you all know by now. With the new year comes new resolutions, and so it was decided:

My goal for 2012: One international cuisine week per month for twelve months.

As you may have guessed, this first cuisine week is Vietnamese – a cuisine I was entirely unfamiliar with. It turned out pretty well, with a few particularly awesome dishes. Read on for the deets… (and to find out what cuisine weeks are coming up next!) 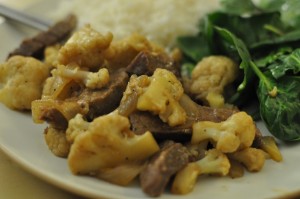 Not a bad first dish, pretty basic – flank steak and cauliflower stir-fried in garlic and fish sauce with a bit of onion. I served this up with kasmati rice and some lightly dressed spinach. Solid flavors overall. 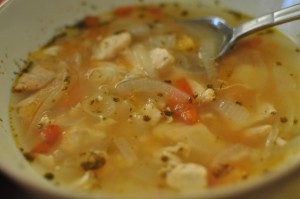 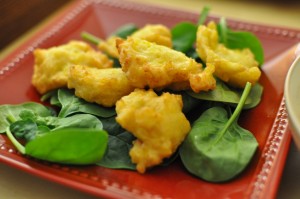 In this case, I’m going to have to rate the two parts of the dinner separately because the soup was okay, but the fritters were pretty freaking awesome! The soup probably would have been better if I had used fresh dill, however the market was out that day. Oh well, it was good for what it was – very salmony.

The fritters though, wow. Tasty fried sweet corn bundles of joy. And dipped in a sweetened Sriracha sauce for some serious kick. SOOOO good. I will be making these again – and will probably double the batch! 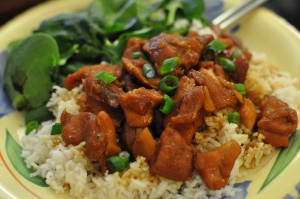 If you recall, I said Vietnamese week had some particularly awesome victories – the fritters were the first, and this chicken was the second. First of all, I made the caramel sauce myself – just a) boiled sugar in water until it smoked, b) took it off the heat and swirled it around until it blacked, c) submerged the bottom of the pot in cold water to stop it from cooking, d) poured additional cold water into the caramel (this extra water is what made it into a liquid sauce), e) returned it to the heat and stirred until the water was mixed in well with the caramel. Bam. Caramel sauce.

The rest was pretty straight forward – place boneless, skinless chicken thighs chopped up with some ginger in a sauce pan, add the caramel sauce and some fish sauce and simmer for 15~ minutes. Viola, you have the most amazingly tasty chicken ever. 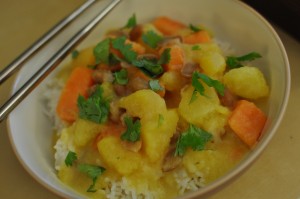 This one turned out to be a bit of a disappointment. I used acorn squash instead of the recipes banana squash or butternut squash. I don’t think that was the problem. It really just lacked strong flavor.

The recipe called for raw peanuts, winter squash, sweet potato, a bit of sugar, and of course the coconut milk – simmered until the veggies had cooked and the coconut milk had thickened into a sauce. The best part in my opinion was the peanuts! If the recipe had has some kick to it, maybe a bit of curry, more of a Thai spice flavor – it probably would have been pretty good. 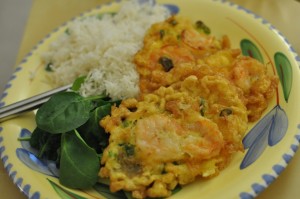 These were sort of like an egg foo young, but better. They were also extremely simple to make – just mix a few beaten eggs with shrimp and scallions and ladle about 2 tbsp. at a time into a 1/4″ of oil. Flip when the edges start to brown. On their own, they were pretty good – but dipped in a tiny bit of fish sauce, they were epic.

And so that was Vietnamese Week! Pretty good, I’d say! There are definitely a few things I’ll be cooking again. Now it’s time to prepare for next month – FRENCH!! And what better cookbook to refer to for French cuisine than Mastering the Art of French Cooking?! So if you have any favorite recipes from the book that I should consider for next month – let me know in the comments!!