During a visit to the in-laws over Thanksgiving weekend, I had a chance to peruse their sizable collection of cookbooks and picked up Mexican Everyday by Rick Bayless. And so it was decided – Cuisine Theme Week No. 3 would be Mexican!

This was an awesome first dish – It set the tone for the whole week! It was vegetarian, but with the spinach and mushroom – very hearty! The tomatillo sauce was pretty easy to make with the help of my food processor. 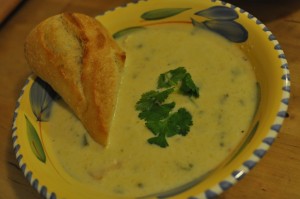 A tasty soup indeed, but not too special. Roasting the poblano was my favorite part – I can’t wait to make something with poblanos again! 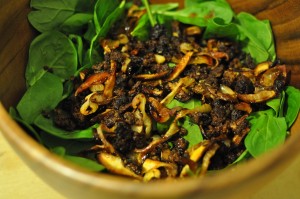 This was a pretty simple, yet filling salad. The flavors were surprising and perfectly matched. It was light and refreshing, and very tasty. 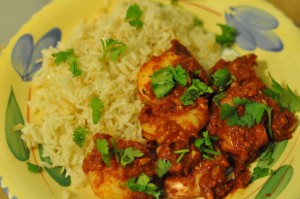 Mmmmm, spicy! Lots of chipotle peppers, garlic and tomatoes. It had some serious kick! Nicely paired with the rice. 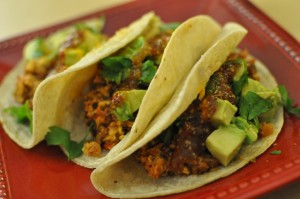 One of our favorites for the week, even though I slightly botched the recipe! It called for food processed onion, garlic, and jalapeno… I accidentally over processed and thus had to go again, but being out of jalapeno, I used some leftover chipotle chiles instead! The recipe also suggested adding chorizo, which I did and it was wonderful! 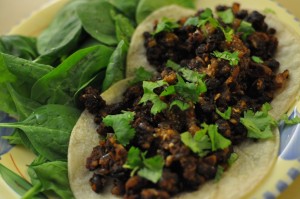 I partially made this dish up, but followed a very basic recipe for beans and chorizo as a meal. I added onion and some more chipotle chiles to kick it up a notch! 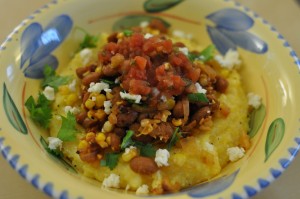 I totally made this one up and I’m pretty proud of myself! I had some leftover chorizo to finish up and found some other appropriate ingredients in the pantry. The polenta filling/topping included: garlic, shallots, pinto beans, frozen corn, chipotle peppers, chorizo, queso fresco, and cilantro. I also put a bit of queso fresco in the polenta to add some flavor. It worked out pretty well :)

Victory overall! I’ve got to take a break again from theme week as I’ll be going out of town next weekend and won’t be able to invest myself as much. But I’m thinking, Cuisine Theme Week No. 4 might be something like Thai or Indian… hmmm!