Following the success of Middle Eastern week, I decided to try the theme week again – this time it was Italian!

While Italian week didn’t turn out quite as phenomenally as Middle Eastern week, it was still pretty tasty. I think part of the problem with Italian week was the cookbook I used. It was a cheap $4 Borders book. The recipes were all just somewhat bland and not the easiest to follow. I ended up adding a lot of spices.

But since I love Italian food so much, you can bet I’ll be trying this again with the help of a different cookbook! 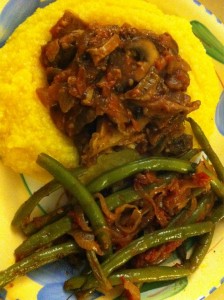 For the first dish of the week, this dish wasn’t too impressive. The combination of mushrooms and polenta was a little odd, but the green beans were rather good! 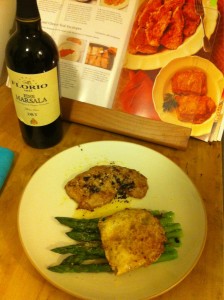 We definitely liked the asparagus-egg combination of this dish, and the veal was definitely a nice change of pace. The Marsala sauce didn’t quite turn out though. But since I always love a good Marsala dish, I’ll certainly be trying it out again. 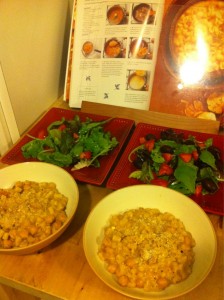 Well I almost botched this one up entirely. The recipe called for dried chickpeas soaked over night and then cooked for about 2 hours. Well, I decided to go exercise in the other room while the chickpeas cooked and when I came back the water had all boiled off and the chickpeas had started to burn. Fortunately, I had a can of chickpeas in the cupboard, so I got those cooking up instead.

The soup also contained a bit of bacon, onion, garlic, and of course pasta. Not too much as far as spice goes though. As I sampled the flavor while it cooked, the spice levels definitely left something to be desired, so I added quite a bit of extra salt, pepper, cayenne, and garlic power. It ended up having more of a mac-n-cheese consistency rather than a liquid soup. But the good news is that it was pretty tasty in the end. 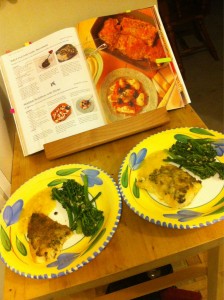 The cod came out pretty well considering that I substituted a caper spread for the recipe’s anchovy spread. I was a bit unsure of the homemade mayo, but it was a nice complement to the cod. The broccoli (I used broccolini) was pretty great, covered in bits of garlic. 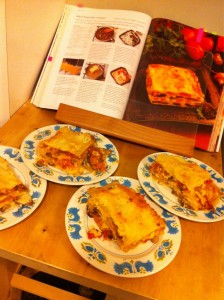 The lasagna though, was definitely the star of the week! It was quite a bit of work to put it all together, but it came out even better than I imagined. I even made my own “bechamel” sauce! I put bechamel in quotes because it probably wasn’t technically correct. ;)

So what’s the plan for next week? I’m still deciding. I don’t have any more international cookbooks (though, I have a few on order!), so I will either be running to the bookstore later tonight or taking a short break from theme week. Follow me on Twitter or Facebook to find out soon!