Last week I decided to try something different – a whole week of cooking dinners from the same international cuisine. Since I had a Middle Eastern cookbook on lend that I hadn’t yet gotten into – Middle Eastern it was!

All in all, Middle Eastern week was wonderfully successful! One dish might have even made the #1 spot on my husbands “Best Meals Made By Julie” list!

One of my favorite things about cooking an entire weeks worth of dinners from the same international menu was that shopping for ingredients and avoiding the waste of ingredients was incredibly easy – almost every dish contained a base of the same ingredients: garlic, onions, and cilantro! This week was probably the first time I made it through an entire bunch of cilantro! :)

So here’s the run down of what I made: 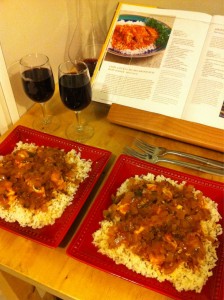 This first dish was probably my least favorite of the week – it wasn’t bad, but it ended up being pretty bland overall. The sauce was tomato based with a few spices, but more spice would’ve been better.

Dinner No. 2: Falafel and Tomato Salad 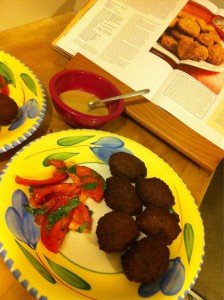 “Holy shit, I made falafel!” That about sums up how I feel about this one. It was awesome. I got to use my new fryer for the first time, and they came out like falafel! They were soooo good. I’ll definitely be making them again. 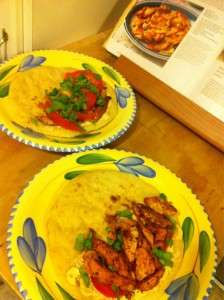 This one was pretty solid. Nothing super special, but a decent shawarma pita sandwich – complete with hummus, tomato, and cilantro. 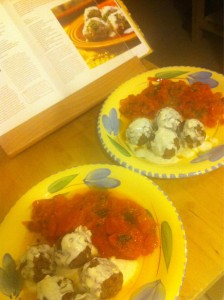 These meatballs were pretty darn tasty – and the yogurt sauce was a great touch. The tomatoes were good too, but they came apart as soon as I tried to remove them from the pan – so next time I won’t cook ’em as long. 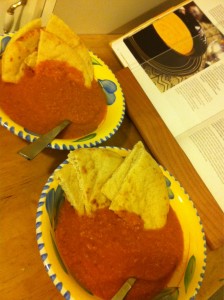 A tasty soup to be sure. It had a great kick from the cayenne pepper and paired really well with the pita. But ultimately, wasn’t anything life altering.

Dinner No. 6: Basal Mahshi with Spinach and Chickpeas
Onions Stuffed with Lamb and Rice 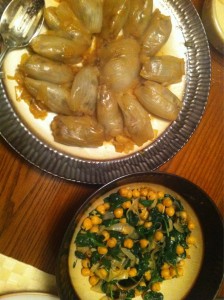 Oh man. This one was quite the star of the week. The stuffed onions were cooked in a pomegranate syrup sauce which infused the onion and lamb with sweet, savory flavor. The spinach and chickpea plate was a perfect complement with its salt and peppery touch. Total win!

Totally can’t wait for the next Middle Easter week :)

And since Theme Week was such a success, we’re trying it again this week with Italian!! Check back next weekend to see how it went!