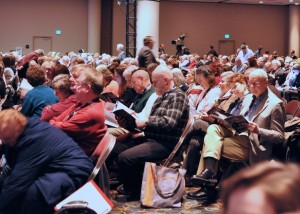 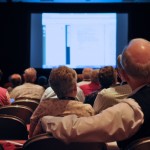 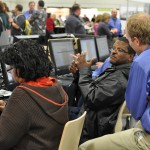 Well once again, RootsTech was a huge success. With registrations up over 30% from last year, we had over 4000 genealogists and developers in attendance. And if I had to guess, there were probably twice as many developers as last year.

Maybe it’s because I’ve been up since 5am, have a cold, and generally haven’t gotten much sleep in the last 4 days, but I find it difficult to describe the overall essence of RootsTech – at it’s purest, perhaps: passion and excitement. Everyone who was there, or who followed it online, knows it was a big deal, a game changer. Two booming industries, two completely different types of people, massive age gaps – but – everyone’s on the same page. Everyone knows that technology is what will move the field of genealogy forward. Everyone is excited about the possibilities.

This was a recurring theme among attendees. Seeing genealogists and technologists sitting down together and discussing the need for advancement and the possibilities for implementation was a sight to be seen. And we already know this mashup of communities works – GEDCOMX is a direct result of it. Genealogists made the call for a better standard, a better way to house data – of all types – and technologists are coming together to find and implement a new, dynamic solution.

I attended a pretty even mix of user and developer sessions, here’s a semi-brief run down on my favorite five:

The Powers of Evernote: Photos, URL’s, Censuses,
Geo-location, and Stories

I already use Evernote quite a bit, even for genealogy to some degree. In fact, I’m composing this blog post in Evernote on the flight back to Detroit. So I already had a fair idea of what it’s capable of, but I wasn’t familiar with the many of the integrated tools and was interested in how others are using it to supplement their research. Here are just of few of those tools and uses:

Basically, it was suggested that you store everything related to your genealogy research in Evernote. Could be cool, will I try doing that… mmm, I don’t know… we’ll see.

This was an awesome presentation from Barbara Renick – she really knows what she’s talking about here. So if you’re having trouble finding someone, here are 11 steps to take that might just lead you to a breakthrough:

Telling Stories: Transforming the Bare Facts of Genealogy Into the Astonishing Tale of You and Your Family.

As genealogists, we’re constantly digging up facts and compiling information – but just having all of that data doesn’t mean we have a story to tell. Presenter, Ian Tester, discussed what it takes to turn your own family stories into Who Do You Think You Are? worthy tales. The following video was shown as a basis to that discussion.

Stories Through Data from Ross Forrest on Vimeo.

Making the Most of Technology to Further the Family History Industry (Ancestry.com Panel)

This was a great panel with some of Ancestry.com’s top technology leaders led by Tim Sullivan, President and CEO of Ancestry.com. They discussed technologies they’re working on, technologies of the future, what it was like to support the website during the third season premier of Who Do You Think You Are?, and the growing IT needs at Ancestry.com.

So Titanium is pretty awesome. Now that I know more about it, it seems like a good candidate for an idea I have (see the conclusion). The session discussed the pros and cons of using Titanium, and ran through a simple demo. It was led by some of the Family Search developers – who just the day before – launched the brand new, Titanium made, Family Search Indexing app.

Video for a lot of these sessions will be up soon, but the highlights are already streaming on the RootsTech homepage. You can also check out the session schedule, where you’ll find syllabi for most of the sessions, as well.

The first night of the conference, RootsTech brought in comedian, Ryan Hamilton. He was hilarious!! I think he thought our odd combination of genealogists and technologists was pretty entertaining as well – cracking a few jokes about the age gap. At one point, he started taking audience questions which was epic. Here’s a bit he did for our show:

Late Night at the Library

A tradition carried on from RootsTech 2011, Late Night at the Library was an even bigger success this year. They had to ask us not to all come at once so that they wouldn’t run into fire regulation issues!

First up was the Who Do You Think You Are? Season 3 premier! It was a blast watching the show with such a huge group of genealogists. The crowd’s reaction to the findings and to Martin Sheen’s reactions were very entertaining. And hving an inside look at the production of the show made it that much more enjoyable.

After the show, it was time to get down to business. First, I hit up the subscription sites and scored three key obituaries that confirmed some things I wasn’t quite sure of! After that, I decided to try my hand at searching the microfilms (for the first time) for a specific naturalization record and declaration of intent. I found the naturalization record as referenced the by index, but no luck finding the declaration – I even went back and tried again after the conference. 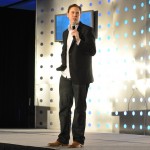 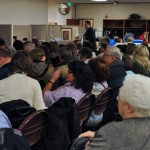 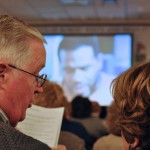 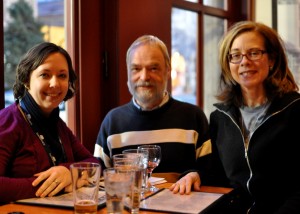 Between all the sessions and events, I had a bit of time to explore the Temple Square area. First, I went at night to take a few photographs. The second time, I went back with a few new RootsTech genealogist friends – Mary Lou and Benjamin. Benjamin, mysteriously, has no legal surname… no joke. Being that he is a genealogist (ie. someone who spends his time looking for last names), this baffled Mary Lou and I to no end. We have not been able to pry to story out of him yet. Maybe next year.

After strolling around the Square and taking a tour of the top level of the secondary LDS office building (where we got some great views), we headed out for a drink at The Beerhive. I had a pretty good Desert Edge UPA, although it was a little weak as far as the alcohol content goes – a theme you can expect from UT beers.

Compared to last year, I didn’t see nearly as many SLC oddities. See last years RootsTech Recap if you want to know what I’m talking about. I did get a few alright photos though – check out the best in the Flickr slideshow below:

Ready for Next Year

Last years inaugural event was excellent, and to me, my official entry into the world of legitimate genealogy. Obviously, I enjoyed the event so much that I didn’t even hesitate to return. This year’s event, however, left me with a much stronger feeling of inclusion and forward momentum. Throughout the conference when people would ask, “Are you a user or developer?” I replied with, “I’m in the middle,” and I think that’s probably the best place to be. I have a strong interest in doing the research and seeking out dead people, but I’m also interested in creating the technologies to help me do that research.

Just a week ago, an idea for a genealogy research log tool popped into my head – because, in all honesty, I suck at logging my research. There’s no easy way to do it! You either have to write or type out long names, specific spellings, data sources, and more. I just want to do the research, not spend 75% of my time compiling the details on how I’m doing it. And, it seems like I’m not alone. In D. Joshua Taylor’s Genealogy Software Forecast session, there was an overwhelming majority of attendees who admitted to not keeping a log, and a discussion that went on to cover the need for an easy, fast, intuitive, and even automatic way to log from any location. So that is my goal this year, to create and develop an awesome multi-platform (see the Titanium session mentioned above) research logging tool – specific to genealogy. If all goes well, I hope to be entering it into the RootsTech Developer Challenge in 2013!!

Well that just about covers it! It was a pretty awesome and successful trip and I can’t wait for next year. Side note: it was also pretty successful for my Twitter account – I was retweeted by @RootsTechConf, @AncestryDotCom, and even @RyanHamiltone – hello >20,000 impressions!!