If you’ve been following my blog / twitter / facebook, then you probably know that I recently bought a new car. Well this weekend, I travelled back to the land of Illinois to acquire said car. While there, I took the opportunity to seek out a few ancestors who I knew were in the area. My sister graciously accompanied me.

Overall, our search was a huge success – we found two sets of great-great grandparents and 14 relatives total!!

The Schick Family at Oakridge

Starting with Oakridge Cemetery in Hillside, we knew where to look as our mother had been here before and told us that the family was in section 3, and sure enough there they were. This plot includes my great-grandmother Ella Schick Lindstrom, her parents (my great-greats!) Conrad and Mary (Pagels) Schick, and a few of Ella’s siblings. All of the Schick’s had lovely matching headstones. 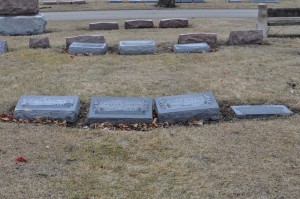 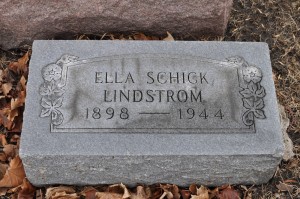 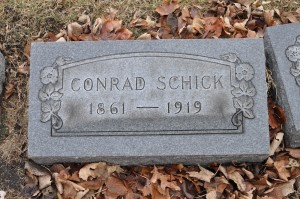 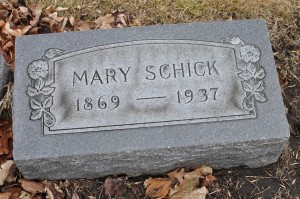 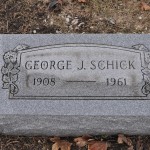 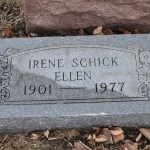 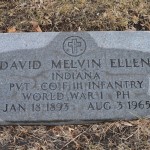 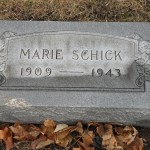 And at this point, I have to admit that I feel like an a$$. Somehow, in my excitement over Conrad and Mary, I neglected to photograph Marie Schick’s headstone – I took soooo many photos I must’ve thought I’d gotten her when I didn’t!! Thankfully my sister nabbed a shot!

The Niedzwiecki’s at St. Adalbert’s

Next up, we headed over to St. Adalbert’s in Niles to look for our great-grandparents – Henry and Agnes (Sinwelski) Niedzwiecki. To find them we had to use the burial lookup kiosk, which worked fairly well – but could certainly use some UI adjustments. We found them pretty easily; they both had lovely matching headstones, as well. 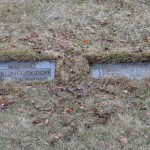 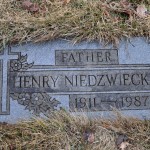 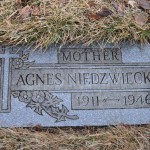 In addition to Henry and Agnes, we also knew that Agnes’s younger brother Herman was buried here. Herman died of acute gastroenteritis (infection of the digestive tract) while he was still baby, at the age of one month. As it turns out, Herman was buried in a “term grave,” meaning there is no way to know exactly where he is in the cemetery as these graves are generally unmarked and the caskets are stacked up on top of each other. Here is a great article with more detail on how term graves work: Where are grandma and grandpa? Confusion over term graves

The Sinwelski’s at Holy Cross

In searching the cemetery database at St. Adalbert’s, we came across a few other familiar names in the Sinwelski tree – all now lie rest at Holy Cross Cemetery in Calumet City. Since Calumet City is on the Illinois/Indiana border, I decided to make the detour on my way back to Michigan.

My first stop was in Section 19, Lot 5, where two of Agnes’s brothers lie – Frank S. and Eugene F., both WWII veterans. Interestingly, their graves were separated by an unknown couple – the Grout’s. There were a few other Grout’s surrounding them as well… hmmm. 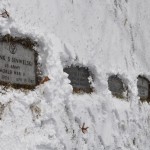 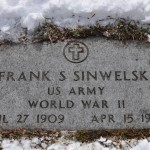 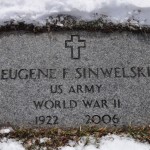 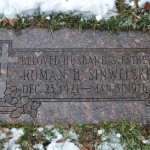 Just a few yards away, across the road and in the adjacent Section 18, I found another brother – Roman H.

And last but definitely not least, it was time to find the most challenging of them all – Leo and Mary Sinwelski, the Sinwelski sibling’s parents and my great-great grandparents – in yet another adjacent section – Immaculata. All I had was a lot number (no block or grave number), and the numbered signs placed around the section with the intention of providing guidance were really rather confusing, plus I had to clear snow off every grave. But soon enough, I found what I was looking for. 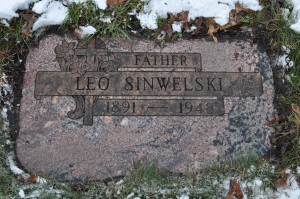 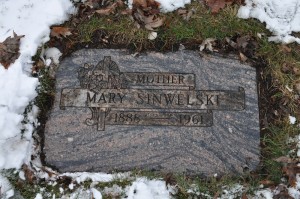 These two were not side by side, but rather toe-to-head – at Leo’s feet lies Mary, which I found to be somewhat strange. Another interesting point is that the database listed Leo with the last name Szinwelski, but his headstone spells it without the “Z.”

Well, that’s it! I think between these great findings and my new car, this qualifies as a pretty successful weekend :)