Memories of a
Cuban Kitchen

Whew! Cuban “Week” ran a little longer than expected… it lasted a little over 2 weeks actually. A busy month slowed things down… and it turns out plantains take a long while to fully ripen. But it’s all over now, and was good for the most part. Not my favorite cuisine week though… now let’s see if I can remember all the details. 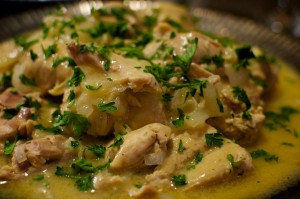 This was some good, tender chicken, but not bursting with flavor. The chicken was rubbed with garlic and cumin, marinated in orange, lime, and lemon juice, and then cooked with onion and dry sherry. 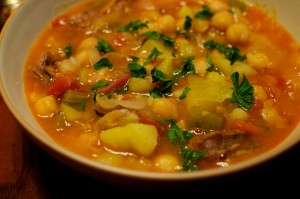 My second dish ever featuring ham hocks, this was a pretty hearty stew. Not only did it get some smoky flavor from the ham hock, but it also got some kick from some chorizo. But even with the ham hock and chorizo, the flavor was lacking that something special to melt it all together and give it a real punch. 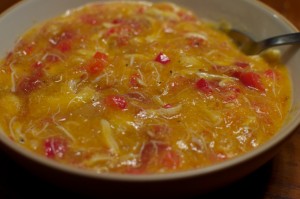 The best meal of the week by far. The most unique flavor of this dish came from a jar of pimientos which sharpened it up and gave it a kick. The cornmeal base was different but worked really well. And the crabmeat was excellent, but I guess that’s to be expected when you inadvertently purchase a $35 can of it. Put all that together and you’ve got a solid and hearty stew. 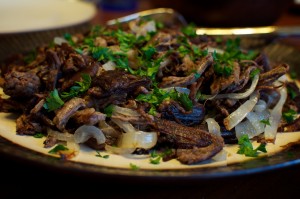 This was an interesting preparation. First you boil a flank steak in water with a bay leaf for 1.5 hours, then remove it, let it cool, chop it up and shred it. Then you let the cooked, shredded beef marinate in lime juice, lemon juice, and garlic for at least an hour. After that you squeeze the marinade out of the beef and fry it in oil with onions until it’s crispy. 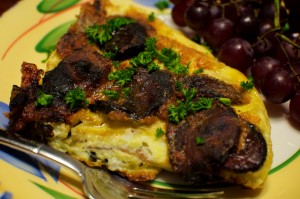 This was a yummy omellete even thought I burned the plantains a little bit. The first step was to fry up plantain slices, which you then place a layer of in the skillet. After the fried plantains are heated, add whisked eggs and cook until set, then flip. The fried plantains had a syrupy flavor which gave the eggs a light and sweet breakfast flavor.

So Cuban week has finally ended and so has a lot of the business that made this “week” take so long!

Next month’s Cuisine Week is Moroccan! Looking forward to it!