The Complete Book
of Greek Cooking

Man, this month’s cuisine week was pretty hard to keep going – more on that in my next blog post – but everything ended up really excellent. The recipes were all pretty basic, using a lot of fresh and flavorful ingredients. It was the perfect refreshing cuisine for the month of July. 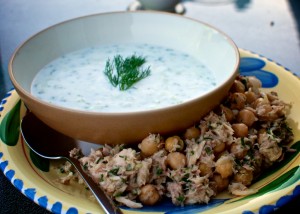 Good timing for this one. Our AC had just died a few days before and it was 90+ degrees in our house all day, so having 2 cold dishes to chill out with was a welcome treat. The tuna and chickpeas were flavored with herbs, lemon juice and olive oil. The cucumber soup had some kick with a fair amount of garlic. 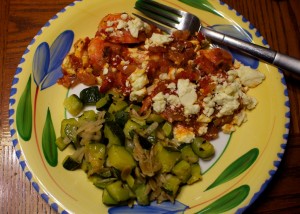 This shrimp dish was so tasty! The sauce was slow-cooked with tomatoes, onions, and herbs and topped off with a generous amount of feta cheese. The sauce and cheese melted in my mouth. The orzo and zucchini was a nice combo, as well – lighter and refreshing. 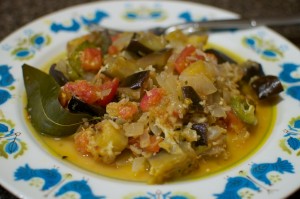 I got Adam to eat eggplant again!! And he liked it!! …Mostly, sorta. He had a few bites and said it was really good, and then he had a few more bites and asked if the purple stuff was eggplant, and then he said, “yeah… I don’t really like eggplant.” Le sigh. Well, I really liked it – it was a wonderful combination of flavors and fairly simple to put together. 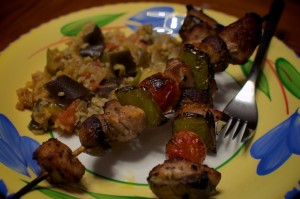 Pretty standard chicken kebabs here. The marinade was good, but didn’t stand up to the grilling so well. Good though, nothing special

Holy awesome sauce. This one was a winner. It took a few hours to make, but I’d say it was well worth the effort. The filling included lamb, onions, celery, tomato sauce, olive oil, eggs, rice, pecorino romano, and herbs. While it was cooking, I was concerned because it was so soupy, but it thickened right up once the eggs and rice were added. It was so good that my team at Quicken Loans devoured the bulk of it at lunch the next day. Win.

So Greek week worked out. It was the first cuisine week in the new house :) So we’re off to a good start here.

August’s cuisine week is Cuban! I’ve not really tried much in the way of Cuban food… I think they like ham sandwiches right? We’ll find out in a few weeks!